Black Panther and Ant Man 2: How One Film Connection Student Got Working on Both! 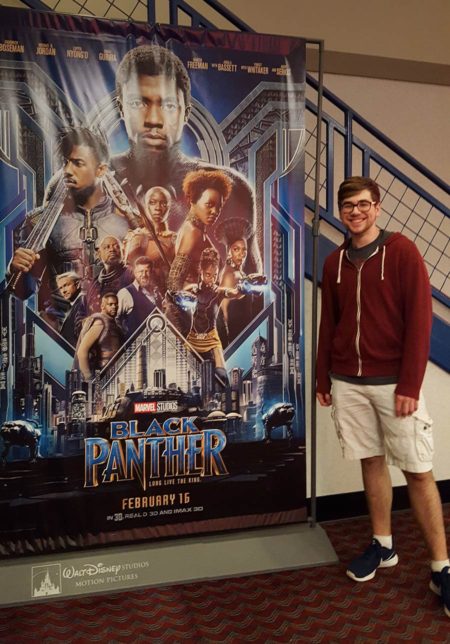 The same month Film Connection graduate Jason Reinhardt was finishing his externship with film mentor Steve Carmichael at RITE Media Group, he got hired as a PA on the Black Panther production while they were was doing reshoots in the heart of rural Georgia. So, how did it happen?   We’re big believers in making connections. We say it constantly and consistently and the word is even in our name. So how did Jason get hired on as a PA on the big budget, box-office breaking action movie that’s changing the film business?   Take a guess.   Jason explains, it happened through the connection he made with a friend of his mentor, just one in “the long line of friends that I’ve made through Steve Carmichael.” This connection in particular “has been working on The Walking Dead…and she’s been a key source of a lot of my big jobs, or at least getting me connected with a lot of big employers.”   But working the big productions isn’t all Jason is focused on. He’s invested in working as much as possible and on a variety of different projects. To say he’s being proactive is almost an understatement. He’s attending workshops, working on local and commercial shoots, and basically immersing himself in the process every chance he gets. And yes, he’s got a screenplay in the works too!   Jason has seen, firsthand, how jumping in on one industry event can yield numerous opportunities. When a local networking film group had a meeting at a well-known film equipment rental house, Jason made it a point connect with not only the professional and aspiring filmmakers in the group, but also the people who work at the rental house.   In other words, he was super smart about connecting with the very people who are on the frontlines of making film, TV, and media in the greater Atlanta area. Shaking hands and getting to know numerous people involved in the day-to-day business, yielded great results.   When a volunteer gig for Rise Against Hunger came up, Jason jumped on it. That further solidified some of the relationships he’d built with people at the equipment rental house, including a manager who asked him to work the 48 Hour Film Fest. He ended the 48 saying, “You guys ever need a PA again, please feel free to reach out.” And sure enough, a few weeks later, they started reaching out.   The connections he made on 48 led to a series of smaller jobs including a photography assistant gig, and then Ant Man 2! Yes, that’s right, Ant-Man and the Wasp!   On that production, when things stalled due to trucking problems, Jason didn’t stay idle. He picked up a broom “and started sweeping the entire stage…a 5,000 square foot stage that we had, and I was just sweeping for an hour, just waiting for the truck…From there the shoot went on, [and I] met a bunch of the cast.”   Jason takes what he does seriously. On the set of Black Panther, when he wasn’t running to assist with something, he was working as the self-described “water boy” handing out cold or room temperature water, according to cast and crew’s preference, and making a positive impression wherever possible.   “I got on good terms with the main villain when he needed cough drops and I was there with a handful. I actually met large majority of the cast including…all of the warriors who protect the king, the main villain, Black Panther, Chadwick Boseman himself, all of the stunt doubles and all of the stand-ins…Overall, the days where a blast. I learned a lot and met a lot of amazing people!”   But so far, the most magical of moment for Jason happened the in the morning as he was driving up to work the Black Panther shoot, located somewhere in the Georgia boondocks.   “No street lights, nothing. It was just straight road and the deep forest as far as the eye can see. The first day that I arrived there was foggy and hazy. As you drove up the mile-long gravel road to the parking lot that they had, you just caught glimpses of props and sets from previous scenes, then you’d see massive cranes moving in the haze. I just kind of got goosebumps while I was driving in, just a giant smile on my face.”
ShareTweetSharePostShareShareEmail
*  *  *  *  *