Recording Connection grad Anthony Montejo hits the road with Jam In The Van! 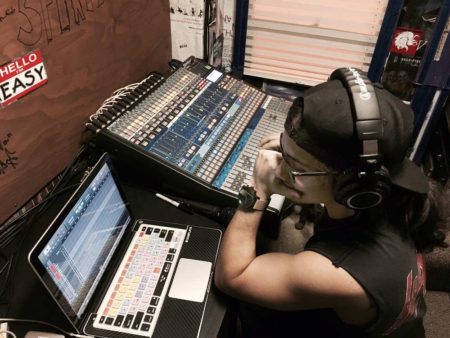 Anthony working at JITV session on The Van

When you learn audio engineering on-the-job in a real studio, it gives you real experience that can open doors for some incredible opportunities. Recording Connection grad Anthony Montejo found that out firsthand when he got the opportunity to sign on with Jam In The Van, a unique mobile recording studio that travels the nation to feature up-and-coming talent!   Anthony initially got word about the opportunity from a Recording Connection student advisor. “I told them to sign me up to see what could happen,” he says, “and then a couple days later I went in for the interview. And then a couple days after that is when they told me that I got the position and they wanted me to start as soon as possible!”   Anthony first discovered Recording Connection online when he was just about to commit to another recording school. He was hesitant at first, he says, because he thought the opportunity was too good to be true.   “I was a little skeptical about it,” he says. “The tuition was so much more affordable than the school I chose.”   The Recording Connection arranged for Anthony to meet his mentor, Donny Baker, and see the studio that would become his classroom—ES Audio in Los Angeles, CA. Once he realized the opportunity, Anthony was hooked.   “The studio was really nice,” he says. “When I heard…that you get to be an actual extern in the studio, as opposed to a classroom, that’s when I found out that this is what I wanted to do instead,” he says. “You get to learn everything hands-on while it’s happening in real life. And the whole mentor and extern approach is one-on-one, as opposed to you’re in a classroom with 20-odd other students where you don’t even get to do real life experiences or situations.”   Anthony made the most of the opportunity, immersing himself in the process. He says he went do the studio at least four times a week, then practiced his skills with friends at home. “All of my friends are musicians,” he says. “So ever since I started going to Recording Connection, I would bug them like, ‘Hey, come to my house so I can work with you, so I can try to put into work what I just learned.’”   Learning in the studio truly paid off when the opportunity with Jam In The Van came along. Not only did he get hired from his studio experience, but Anthony says his boss Ethan Glaze was impressed with his skills. “When I came in, he didn’t have to be over my shoulder trying to see if I was doing anything wrong or doing anything right,” says Anthony. “He was impressed with me because of what I learned from Donny.” 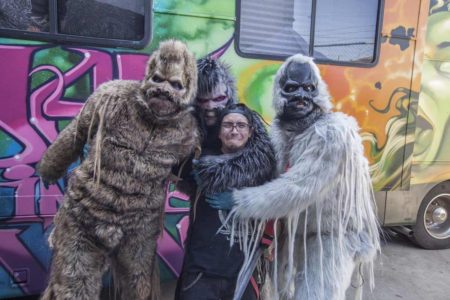 Once he landed the opportunity, things moved quickly, as Anthony was flown out to Colorado to join JITV for the GoPro Mountain Games. “We have to set up everything from the drums, the amps, from the routing, everything,” he says. “We have to set up everything as fast as possible because as soon as one band is done, we have to tear everything down and set it up for the new band… From the time we record them to the time they’re done, to the next band, it’s about 45 minutes.”   Billed on their website as “the world’s first solar powered music discovery vehicle,” Jam In The Van travels to events across the country, recording live performances from up-and-coming bands and artists and featuring them on their website and YouTube Channel. Not only has it proven to be a great opportunity for Anthony, but it’s been the beginning of what promises to be a fruitful partnership between the Recording Connection and JITV, with more opportunities for students and graduates in the near future. Meanwhile, Anthony says he loves the people he’s working with, and he travels with them whenever he can.   “They’re great; they’re all awesome,” he says. “We just have a good time all day because that’s how it is with them. When we have to do work and record, we’re all serious, we’re all down to business. At the end of the day, it’s all fun. It’s great.”   Check out a funny video with Anthony and the guys from JITV in the Student Work section below!
ShareTweetSharePostShareEmailPin It!
*  *  *  *  *