The Lowdown on Recorded Sound Through The Ages

In 1857 a Parisian printer and bookseller named Édouard-Léon Scott de Martinville invented the phonautograph, the first man-made device to record sound waves as they passed through the air. The invention’s initial purpose was to create a visual record of the sounds that had transpired. Although it could record sounds at just a fraction of the audio sound spectrum, it lacked the ability to provide playback. Nevertheless, the phonautograph was the first successful invention in the history of recorded sound. 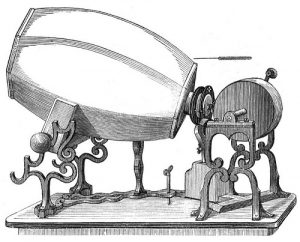 In 1877, Thomas Edison used Martinville’s ideas along with Charles Cros’ additional inventions to create the phonograph; a device that could both record and playback recorded sound. Utilizing both the stylus that Martinville and Cos had been using and combining it with a number of advancements, including a diaphragm, Edison was able to implement the first phonograph the grandfather of the turntable.

From the late Victorian era up until the mid-twenties, sound technology remained somewhat unchanged until 1925, during the Electric Era which “electrified” the phonograph player. Along with the advent of indoor electrical lighting, electricity made it possible for music lovers to stay up late at night and listen to phonograph records without the need to wind the crank. Hence, listening to music became a leisurely activity and the silence in many homes was replaced by the crackle of the phonograph.

The next leap forward in the history of recorded sound occured in the 40’s with the use of magnetic tape, the precursor of what some of you will remember as the 60’s 8 track tape, and cassette tape of the 70’s and 80’s. In recording, magnetic tape allowed audio engineers to record multiple segments of audio and keep them perfectly in-sync with each other. 8 track tape recorders became the choice recording equipment during the late 50’s and bands like The Beatles and The Beach Boys got super creative with the technology they had available which led to the creation of various audio engineering techniques and tricks of the trade. As multitrack analog recordings became the norm, the analog console became the Ferrari of the recording studio. Multi-track audio also allowed for the advent of stereo sound during which engineers started recording with “stereo image” in mind. Recording to magnetic tape would persist as the norm until the mid 70’s, and is still in use today.

The disco era took off during the beginnings of the digital era and artists like Stevie Wonder and Nile Rodgers have a whole lot to do with developments in music production, recording, and advancements in “electric music” so be sure to look both of them up if you want to learn more. After recording to tape, recording digitally took off with the earliest DAWS (Digital Audio Workstations) coming to market in 1984. From the 80’s until the present, average music listeners have seen the format of the music they listen to and purchase go from cassette tape, to CD, to digital mp3 and streaming.

Just think about how far recorded sound has advanced in the past two hundred years! Today your iPhone has the ability to record your voice instantly. Today, you can go home and with a DAW on your computer, you can compose your own song, or create a beat and send it to a friend you’re collaborating with halfway across the planet! Thanks to the work of Martinville, Cros, and Edison and the many inventors who have lent their talents to the ever-continuing evolution of recorded sound, we have the capability to store tens of thousands of songs on our iPhones and portable devices, and the ability to make music is quite literally, right at our fingertips.

What You Need to Set Up a Home Recording Studio

Our Picks: The Best Music Websites for Audiophiles