Are you getting CONNECTED?Hosted by multi-GRAMMY-winner IZ (Usher, Mary J. Blige, Chaka Khan) our NEW Connected Hangout takes place every Monday!Bringing you the best jobs in music, film, and broadcasting! Don’t miss out on opportunity. Sign up for next week’s Connected Hangout now!


SPECIAL REPORT: RRFC on the scene–Highlights from Tribeca Film Festival 2016


One of the best places for up-and-coming film professionals to meet with, connect with and learn from other filmmakers is at one of the many film festivals that take place each year. One of the most prominent among these is the Tribeca Film Festival, which happens every April in lower Manhattan in New York City. Founded by actor Robert De Niro, Jane Rosenthal, and Craig Hatkoff as a response to the 9/11 attacks, this event has rapidly grown in its 15-year history to rival festivals like Sundance and Toronto, attracting major filmmakers, actors, celebrities, and of course some of the best films you’ll see anywhere.   Several Film Connection students, along with our own writer Jeff McQ, were in attendance at Tribeca this year to experience some of the excitement. Here are just a few of the many highlights from Tribeca Film Festival 2016, along with some observations from our students.
*  *  *  *  *
Women in film This was a great year for female filmmakers at Tribeca, with nearly 40 percent of this year’s films being directed by women. Expanding beyond film itself, the Daring Women Summit on April 20 celebrated women who are leading the way in many different fields of art and technology. The festival also featured a conversation with actor-turned-director Jodie Foster (whose film Money Monster premiered at Tribeca this year), while director Catherine Hardwicke (Twilight, Lords of Dogtown) held an informative master class to give the audience a glimpse into her pre-production process.   VR filmmaking?   There’s a lot of talk these days about virtual reality (VR) emerging as a trend in film. Tribeca put a special focus on this trend this year with a Virtual Arcade in the Tribeca Hub, featuring no less than 18 VR projects. Film Connection student Felipe Pava had the opportunity to experience the arcade firsthand. “I liked it a lot because it adds a new ingredient for the audience,” he says, “because the audience is able to get involved and be immersed in the story…You were able to interact with many things with that world.” Felipe thinks VR will play a larger role in filmmaking in the days ahead, though perhaps not in the mainstream. “It’s probably gonna take awhile for people actually to like this type of storytelling, but I think it’s another type of narrative and another way of telling stories.”    Making new connections Film Connection student Jonathan Harris had the opportunity to attend a screening of Mr. Church, starring Britt Robertson, Eddie Murphy, Natascha McElhone and others. “This was definitely Eddie Murphy’s best performance yet, and the rest of the cast was spectacular as well,” he says. Jonathan also got to meet the film’s screenwriter, Susan McMartin, who was on hand for the screening. “She was a really nice and charming person,” says Jonathan. 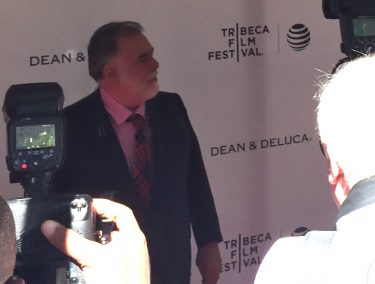 Tribeca Talks   Among the most popular events at the festival are the Tribeca Talks series, which feature insightful and sometimes intimate conversations with noted actors, producers, directors and other film and TV professionals. This year’s talks included conversations with the likes of Tom Hanks, Tina Fey, Andrea Arnold, Mark Ruffalo and many others. Among the highlights: Chris Rock interviewing producer/director J.J. Abrams (Star Trek, Star Wars: The Force Awakens) about the ups and downs of his career; legendary director Francis Ford Coppola (The Godfather) offering his take on new trends in film and teasing his most ambitious project to date; and Oscar-winning director Alfonso Cuarón (Gravity, Y Tu Mamá También) bantering with friend and cinematographer Emmanuel “Chivo” Lubezki (The Revenant) about the director-cinematographer relationship. 40th Anniversary of “Taxi Driver”   One of the high points of the festival was the 40th Anniversary screening of Taxi Driver at the famed Beacon Theatre, featuring a post-film panel discussion with director Martin Scorsese, screenwriter Paul Schrader, and actors Robert De Niro, Jodie Foster, Harvey Keitel and Cybill Shepherd. De Niro (one of the festival founders) opened the night with some tongue-in-cheek remarks. “Forty years,” he said. “Every day, for forty f**king years, at least one of you has come up and said, ‘You talkin’ to me?’” The audience, of course, ate it up.   All told, the 2016 Tribeca Film Festival offered some of the best events, exhibits and screenings to be found in the film community this year. Kudos to the Film Connection folks who were on hand to experience some of the festival’s best moments. We hope you were inspired to aim high!
ShareTweetSharePostShareShareEmail
*  *  *  *  *
Request Information 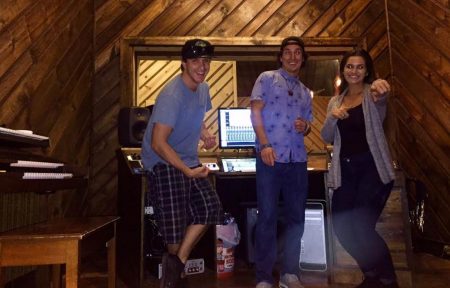 Nigel Dean center with collaborating artist on the left, vocalist on the right.

Recording Connection apprentice Nigel Dean (San Diego, CA) manned the ship while mentor Patrick kept a low profile. “Once the technical aspects were done, Patrick stayed behind the scenes and let me spend 4 hours recording my vocalist, giving me complete control of what was happening inside the studio. This allowed me not only to finish all takes for the entire track but also give me a firsthand steer at the wheel of what it’s like to lead a recording session in real life. It was a very satisfying experience, something that you can’t tangibly do inside a classroom watching power points. After recordings were over, Patrick showed me how to mix vocals properly within a recording.” Desiree Holiday, Recording Connection apprentice in Nashville, TN, discusses the virtues and peculiarities of the mic. “In my experience I have found micing an instrument is much like finding a good friend-we have to get along well, match in characteristics, agree on the intent of the relationship, and enhance each other’s positive qualities in order to create a beneficial experience….While practicing micing drums with my mentor, I achieved the desired goal and wanted to take a picture of the mics used and how I placed them. [Mentor] Mr. Web said, ‘Sure! Just remember you will never mic a drum set like that again, it will never be the same!’ A different drummer + a different drum set + a different environment and intent = a whole new party. Microphone choice and application really rides the subjective/objective line. There really is no right or wrong, no opinion better than the other, just whatever keeps the party going!”
ShareTweetSharePostShareShareEmail
*  *  *  *  *
Apply Now

Recording Connection graduate Chase Zabatta has found a unique way to put his audio skills to good use. After apprenticing with Sax DMA of Terminus Studios in New York City (back when the studio was called “Tainted Blue”), Chase saw a need in his area for high quality practice spaces for bands and artists, and jumped in to meet it. Today, he owns and operates Rapture Sound Studio, a 5-room rehearsal space on Long Island’s north shore, stocked with high-quality gear and audio equipment.   Billing Rapture Sound as a studio “created by musicians, for musicians,” Chase found much of his motivation for building this space out of his own passion for music. “I was a musician, a touring musician, and a singer, and a guitar player,” he says, “and I was doing all that, and wasting money, and I was like, ‘What am I doing?’…[So] I took my musician skills and turned it into a career.”   As a musician himself, Chase felt the common plight of the area musicians who needed a good place to rehearse in, especially when it came to the gear. “When I was younger, I used to go to rehearsal studios,” he says, “and they’re all pretty crappy around here. Around here, they’re really bad…We’re like number one on Long Island, because nowhere else…When you go to these guys’ places, you’re not going to see the kind of gear I have.”   It turned out to be the right idea at the right place at the right time. “There’s really not many of these anymore,” says Chase. “I got lucky because all of the monthly rehearsal [spaces] have been condemned. So now they’re looking for rehearsal studios.” 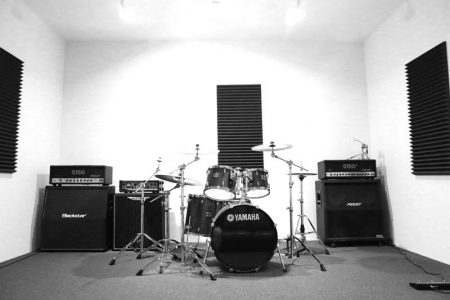 Chase says he’s relied a lot on word-of-mouth and quality experience to help build his brand. “With your artists,” he says, “what you’re doing is you’re getting people to like you and trust you, and they’ll start putting up a review on you and kind of help brand you…You have to be very professional about it. You’ve got to know this stuff, and you’ve got to produce a great product, and when they come back, they say, ‘You know what? This guy is great.’ They start putting up reviews and they come back. That’s what I consider good branding. You know? …Word of mouth is really your best way. You have to do everything to the artist’s expectations, and higher even.”   He also says social media has played a large part in spreading the word, especially in cross-promotion with local acts. “I’ll post on Facebook, their shows and stuff and what they’re doing, their new music videos or whatever they got, and then share it, and then just say, ‘Check out our new client.’ Then they get more likes on their Facebook. Then we take pictures in the studio and everything else, and we put it up and promote their new show…I’ve gone to shows of the bands that have been there…I’ll go to their shows, stuff like that. They’ll help me, they send people my way. I have a few bands that are endorsed that have been helping me, and I help them.”   By holding to the standards of audio excellence he learned at the Recording Connection—as well as by maintaining one of the best sounding rehearsal spaces around—Chase says he’s even had some well-known artists and companies show up to use the space.   “We’ve had people from the Smashing Pumpkins in there,” he says. “We’ve had Nate Watts, who is Stevie Wonder’s bassist and musical director, and we have all these guys, from Zoom Recorders, they come and use the spot. They do videos with artists, showing off the new gear and stuff like that.”   As business continues to grow, Chase says they are working on adding live recording capabilities to the space, including plans to bring in a larger hybrid console and Pro Tools capabilities. Meanwhile, he considers himself lucky to be doing what he loves.   “I started off with what I wanted to do,” he says, “and I’m still doing exactly what I wanted to. And that’s very rare in business. Usually what you start off doing turns into something completely different.”
ShareTweetSharePostShareShareEmail
*  *  *  *  *
Request Information